At least five thousand years ago they had a Black civilization in the Middle East called the Sumerians. Now when they show you pictures of the Sumerians they try and make you think that they were white people. But if you go and read some of the ancient manuscripts or even read between the lines of some of the current writers, you’ll find that the Sumerian civilization was a very dark-skinned civilization, and it existed prior even to the existence of the Babylonian empire, right in the same area where you find Iraq and the Tigris-Euphrates rivers there. It was a black-skinned people who lived there, who had a high state of culture way back then.

And at a time even beyond this, there were a black-skinned people in India, who were Black, just as Black as you and I, called Dravidians. They inhabited the subcontinent of India even before the present people that you see living there today, and they had a high state of culture. The present people of India even looked upon them as gods; most of their statues, if you’ll notice, have pronounced African features. You go right to India today—in their religion, which is called Buddhism, they give all their Buddhas the image of a Black man, with his lips and his nose, and even show his hair all curled up on his head; they didn’t curl it up, he was born that way. And these people lived in that area before the present people of India lived there.

The Black man lived in the Middle East before the present people who are now living there. And he had a high culture and a high civilization, to say nothing about the oldest civilization of all that he had in Egypt along the banks of the Nile. And in Carthage in northwest Africa, another part of the continent, and at a later date in Mali and Ghana and Songhai and Moorish civilization—all of these civilizations existed on the African continent before America was discovered. 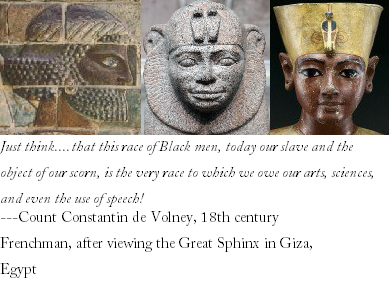 This is why you find many Italians dark—some of that Hannibal blood. No Italian will ever jump up in my face and start putting bad mouth on me, because I know his history. I tell him when you talk about me, you’re talking about your pappy, [Laughter] your father. He knows his history, he knows how he got that color. Don’t you know that just a handful of Black American troops spent a couple of years in England during World War II and left more brown babies back there—just a handful of Black American soldiers in England and in Paris and in Germany messed up the whole country. Now, what do you think ninety thousand Africans are going to do in Italy for twenty years? [Laughter] It’s good to know this because when you know it, you don’t have to get a club to fight the man—put truth on him.

Even the Irish got a dose of your and my blood when the Spanish Armada was defeated off the coast of Ireland, I think around about the seventeenth or eighteenth century; I forget exactly, you can check it out. The Spanish in those days were dark. They were the remnants of the Moors, and they went ashore and settled down in Ireland and right to this very day you’ve got what’s known as the Black Irish. And it’s not an accident that they call them Black Irish. If you look at them, they’ve got dark hair, dark features, and they’ve got Spanish names—like Eamon De Valera, the president, and there used to be another one called Costello. These names came from the Iberian Peninsula, which is the Spanish-Portuguese peninsula, and they came there through these seamen, who were dark in those days. Don’t let any Irishman jump up in your face and start telling you about you—why, he’s got some of your blood too. You’ve spread your blood everywhere. If you start to talk to any one of them, I don’t care where he is, if you know history, you can put him right in his place. In fact, he’ll stay in his place, if he knows that you know your history.

Also, at that same time or a little later was a civilization called the Moors. The Moors were also a dark-skinned people on the African continent, who had a highly developed civilization. They were such magnificent warriors that they crossed the Straits of Gibraltar in, I think, the year 711, eighth century, conquered Portugal, what we today know as Portugal, Spain, and southern France, conquered it and ruled it for seven hundred years. And they admit that during this time Europe was in the Dark Ages, meaning darkness, ignorance. And it was the only light spot; the only light, the only light of learning, that existed on the European continent at that time were the universities that the Moors had erected in what we today know as Spain and Portugal. These were African universities that they set up in that area. And they ruled throughout that area, up to a place known as Tours, where they were stopped by a Frenchman known in history as Charles Martel, or Charles the Hammer. He stopped the invasion of the Africans, and these were Africans.

They try to confuse you and me by calling them Moors so that you and I don’t know what they were. But when you go home, look in the dictionary. Look up the word M-o-o-r; it will tell you that Moor means black. Well, if Negro means black and Moor means black, then they’re talking about the same people all the time. But they don’t want you and me to know that we were warriors, that we conquered, that we had armies. They want you and me to think that we were always nonviolent, and passive, and peaceful, and forgiving. Sure, we forgave our enemies in those days—after we killed them, we forgave them. [Laughter and applause]  See Introduction to Moorish Race and Nationality

Three principal tribes of Aethiopians, the Hesperi, Garamantes, and Indians